The Seven Great Wonders of the World 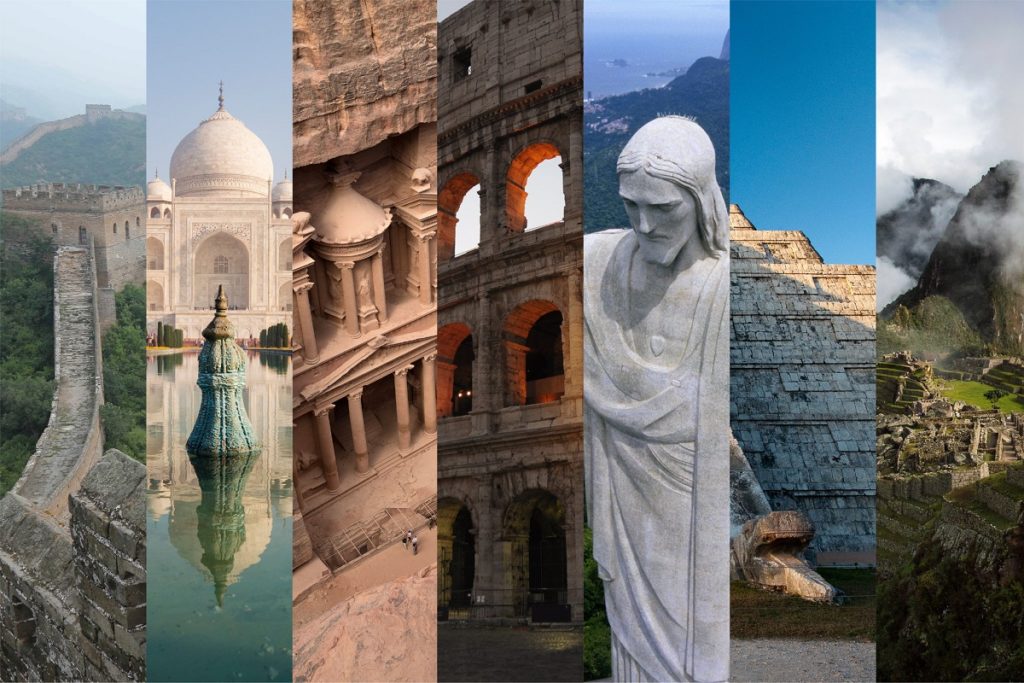 The world as we know it harbors prominent attractions that will shatter your imagination with their unique structures, both man-made and natural. Do you know the Seven Great Wonders of the World?

We often think we know the correct answer to this question, but we don’t. For example, when we think of the Seven Wonders, the mind is quick to go to the Great Pyramids of Giza, even though it was part of the initial seven wonders.

Other wonders that come to mind include; the Colossus of Rhodes, the Statue of Zeus, and the Hanging Gardens of Babylon, which are part of the world’s ancient wonders.

In 2007, a Swiss foundation announced a list of the New Seven Wonders of the world in which only the Pyramids of Giza from the original list that was compiled in 250 B.C remained. Can you name all of the current seven great wonders of the world?

Famous for its remarkable architecture doused in a tale of undying love, this mausoleum complex located in Agra, India, is, without doubt, the optimum structure of Mughal architecture. Taj Mahal was erected in about 22 years with over 20,000 workers.

Emperor Shah Jahan commissioned the Taj Mahal in 1632 in honor of his departed wife, Mumtaz Mahal (Chosen One of the Palace), who passed on during childbirth in 1631.

Both Shah Jahan and Mumtaz Mahal’s tombs are housed within the mausoleum. Taj Mahal was labeled a UNESCO World Heritage Site in 1983 and attracts over 8 million tourists annually.

The Great Wall of China

At 13,170 miles (21,200 km) in length, “great” may be a slight understatement for the most extensive achievement of human engineering. The wonder is undoubtedly one of the leading construction projects the world has ever seen. It currently stands at 5,500 miles (8,850 km) with ruins from the Ming dynasty.

Standing at 6-7 meters (20 – 23 feet), the Great Wall of China was built to protect and mark Chinese states and empires’ territories. The oldest of the structures date as far back as the 7th century B.C., although the Ming Dynasty built the most popular sections from 1368 to 1644.

The building of the wall lasted for two millennia. The wall includes two parallel walls, barracks, the forts, and watchtowers. However, its purpose to protect the Chinese from invasions and raids was overstated, as scholarly studies suggest it was meant to aid political propaganda.

The wall of China is a UNESCO World Heritage Site.

Also known as Raqmu OR Rose Red City by its original occupants, Petra is said to be one of the areas where Moses struck a rock and water came out. It is an ancient archeological city in Jordan.

It is located in an isolated valley amongst sandstone mountains and bluffs. Historians think the City was built around 312 BC and was the capital city of the Nabataeans, an Arab tribe, before they abandoned it due to a shift in trade routes.

That was after two destructive incidents that made trading in the City difficult, including a major earthquake in 363 CE and another in 551 CE. Swiss explorer Johann Ludwig Burckhardt rediscovered the City underneath the ancient layer in 1812 hence “Lost City.” Petra was termed a UNESCO World Heritage Site in 1985.

Located in Tinum Municipality, Yucatan State, Mexico, Chichén Itzá is a Mayan city. The pre-Columbian City was built by the Mayan tribe known as Itza. They are thought to have been archaeologically inspired by the Toltecs.

Since 1988, Chichén Itzá has been one of Mexico’s most visited attractions as a UNESCO World Heritage site. The City is home to several significant monuments and temples like the pyramid El Castillo.

Pyramid El Castillo “The Castle” is 24 meters (79 feet) tall, towering over the main plaza. It has 365 steps, the same as the number of days in the solar year, to symbolize the prominent astronomical abilities of the Mayan people.

Other attractions are; the Temple of Warriors, Venus Platform, and Grand Ballcourt, the most significant sporting field in the Americas known as tlachti, where ritualistic ball games.

There is a disputed belief that Christians were martyred by being thrown to lions at the Colosseum in Rome. The Colosseum was built by order of the emperor, Emperor Vespasian, in A.D. 72 but completed during the reign of his successor, Titus, in 80 A.D.

As the largest amphitheater globally, it can host about 80,000 spectators. Colosseum is another engineering achievement with an intricate vault system standing at 620 by 513 feet (189 by 156 meters).

Events like gladiator fights between men or men battling animals were common at the amphitheater-like mock naval fights when water was pumped into the theater. Estimates show that approximately 500,000 people died here. Countless animals were killed here to the extent of extinction of some species.

Sited in Rio de Janeiro, Brazil, Christ the Redeemer is an Art Deco statue of Jesus Christ facing the City. The statue has a base of 26 feet (8 meters) and stands at 98 feet (30 meters) tall with 92 feet (28 meters) of outstretched arms, making it the most prominent art deco statue in the world.

It was constructed in 1926 but was only completed five years later. The statue was built with reinforced concrete and six million tiles.

Machu Picchu is an Incan citadel in the Eastern Cordillera, Cuzco, Southern Peru. It is on a 7,970 ft mountain ridge with surprisingly nearly intact pre-Columbian ruins. The ruins are home to agricultural terraces, residential areas, temples, and plazas despite their remote location in the Andes Mountains.

Machu Picchu was constructed on the orders of Inca emperor Pachachuti in the 15th century around 1450 before being abandoned about a century later.